Fiat Chrysler Automobiles NV engages in the design, engineering, manufacturing, distribution and sale of automobiles and light commercial vehicles, engines, transmission systems, automotive-related components, metallurgical products and production systems. It operates through the following segments: North American Free Trade Agreement, Latin America, Asia-Pacific, Europe, the Middle East & Africa, Maserati, and Components. The NAFTA segment engages in the designing, engineering, development, manufacturing, distributing and selling of automobiles under the Chrysler, Jeep, Dodge, Ram and Fiat brand names, vehicles with the SRT performance designation and from sales of the related parts and accessories in the United States, Canada and Mexico. The LATAM segment sells passenger cars and light commercial vehicles and related spare parts under the brand names, Fiat and Fiat in South and Central America and it also provides financial services in Brazil and Argentina. The APAC segment offers cars, engines and transmissions and related spare parts under the Chrysler group and Fiat brands in China, Japan, Australia and India. The EMEA segment designs, develops and sells passenger cars and light commercial vehicles under the Fiat, Alfa Romeo, Lancia, Chrysler, Abarth and Fiat Professional and the sale of the related spare parts in Europe, Middle East and Africa. The Maserati segment manufactures, designs, engineers distribution and sale of luxury vehicles under the Maserati brand. The Components segments includes production and sale of lighting components, body control units, suspensions, shock absorbers, electronic systems, and exhaust systems, and others. The company was founded on April 1, 2014 and is headquartered in London, the United Kingdom.

The focus of this analysis is on Fiat Chrysler, however it will be a peer-based analysis, meaning that FCAU will be reviewed with a group of automobile stocks.

The analysis will be top-down.  We'll review the macro-level forces impacting the industry and work our way down to a company by company analysis looking at a broad range of factors (growth, earnings, valuation, dividends and debt).

Here is the peer group:


In our opinion there is a great deal of risk currently in the economy and in the market.  In the U.S. there are the twin specters of rising interest rates and rising inflation, both of which make people poorer, less liquid and hence, less able to afford cars.

There are tariffs, let alone the possibility of a trade war, which are effectively a tax for consumers.  Steel and aluminum tariffs are already impacting costs and may drive car prices higher.  If the automobile tariffs come into effect, regardless of whether they are geo-specific or across the board, they'll create further price inflation.  Car companies will then be in a pincer between rising input prices and sagging demand, resulting in a left-ward shift for both the supply and demand curves. 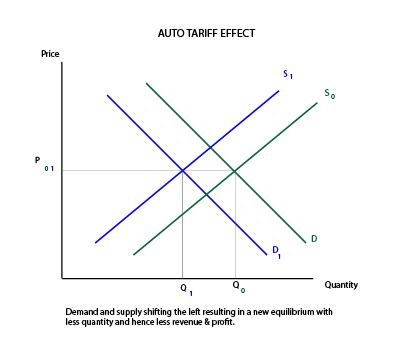 In the stock market, we're 10 years into a bull run driven in large part by earnings and liquidity.
We don't believe earnings levels are sustainable.  Hamstrung unions and weakened bargaining rights for workers have kept wages flat for years.  Eventually, however, the pendulum will shift and wages will start to rise which will reduce earnings.  A full employment scenario, which we currently have, will put further pressure on wages.  However although rising wages will be detrimental to a stock-market (partially) driven by earnings, it's good for car manufactures.

From the liquidity perspective, the bull run has also been driven by quantitative easing (QE) which is in the process of being unwound.  We're now moving towards its polar antonym, quantitative tightening (QT).  If the market started to collapse or even just falter, could the Fed reverse course and move back into QE?  It may find itself without the ability to maneuver.  Inflation is heating up and may grow out of control given the fiscal stimulus (tax cuts) that' have already been piled onto a smoldering economy.

We looked at the portfolio of car manufacturing companies to determine how price and earnings per share (EPS) have changed by taking the average of the one and three year price and EPS for the portfolio and for comparison's sake, the same change for the Dow 30.

Over three years, the average EPS for the car group increased by 56%, however the price over the same period was flat.  For the members of the Dow 30, the average change in EPS was 10% but the change in price was 54%.

Over one year, the average EPS for the car group increased by 15%, but the group's price declined by 1%.  For the Dow 30 over the same period the average change in EPS was -41% but the price on average increased by 19%.

The auto industry has an average EV/EBITDA of 7.4 whereas the Dow group is 14.4.
It is clear by several measures that the Auto industry is relatively inexpensive and price hasn't tracked earnings growth so it appears that the market has priced in risk.  Below is a price graph of the auto industry stocks over the past three years, which takes into account a period before, during and after the election as well the current tariff period we're in.

Clearly the general price trend has been flat.

We're going to look at several factors which would be of interest to a general investor: earnings, valuation, dividends and debt levels.

Each time a company grows its EPS compared to the previous year it earns a one, if not it gets a zero.  The ones and zeros are summed to get a score out of six.

We can see FCAU has grown its earnings year over year three times, which is OK, certainly not that interesting.

Earnings numbers are not difficult to manipulate; cutting a discretionary expense like R&D is an easy way for a company to improve its bottom line.  We like to use a quality of earnings score card we've developed based off the work of Lev and Thiagarajan, academics.

This system helps uncover those manipulations which, because they occur over several years, aren't always easy to spot.  This one looks at nine measures and when one gives a favourable signal it earns a score of one, otherwise zero.  All of the ones and zeros are summed and a score out of nine emerges.  Here are the results for this group.


FCAU at five is mediocre.

We already touched on valuation for the group using the EV/EBITDA metric.  We'll present the individual components now.

This measure gives us a relative picture of value and we can see FCAU is the least expensive of the group.


With the exception of TTM, these are pretty low PE ratios across the board.  How do these numbers compare to the average over the past 5 years?

The average PE ratio has been falling.  In fact over the past five years PE ratios appear to be at their lowest levels.

The OCS is another valuation technique that can give valuable insight into a company.  However it is complex and "touchy" and it is important to review the input assumptions, these are discussed in the analysis notes below.

Here are the results:


Most of the stocks in the list are undervalued, which isn't surprising in light of the information the analysis has uncovered.

Normally we would look deeper into dividends and study the current dividend yield, dividend growth rate as well as try to determine how sustainable it is, however FCAU has had a zero payout ratio for several years and therefore there isn't much information to be gained.

This has been a general analysis, looking at value, growth and income and what an investor might look for specifically in a stock like FCAU.

However, we think that macro forces have been priced into the group as a whole and that valuation levels are very low.  It could be a situation where some good news could start the group moving.  Taking a position would be dependent on one's time frame and risk tolerance as the good news may take time to materialize.

This model uses some current ratios as inputs, such as the current ROE, dividend payout ratio and beta.  It also requires an assumption for the future market return (we used 7%).
The only input that was modified was ROE.  We took a 5 year average of the ROE and then we used the lower of the two possibilities.

The purpose of this analysis is to showcase what the INVRS software is capable of, not to provide the reader with investment advice.

Although every effort was made to provide the best possible analysis into FCAU, INVRS, it's parent company Verdant Analysis Inc as well as the company's directors, officers and employees cannot be held responsible for any investment decisions made because of this analysis.

Popular posts from this blog

11 Reasons Why INVRS is Better Than Excel Alone

September 09, 2019
If you work with your own investment models you likely use excel to build them, but excel isn’t ideal for many reasons and it costs you in other ways.   First, you need good data and it isn’t just lying around in an easy to import format.   You’re either keying it in yourself or paying money for excel downloads.   When you need data from numerous sources – price information, data from different statements and across multiple years - you must merge it from multiple sheets.   It's a n inefficient process which can lead to data corruption. After all this data is collected and merged, models built and tested, the net result is one statistic for one company.   A stand-alone number without context has limited use.   To be meaningful, you need to compare it to similar companies.       This is just a sample of the challenges.  You need software that overcomes these problems and is designed for investment model creation. Surprise!  This software exists,
Post a Comment
Read more

February 03, 2019
NextEra had good results relative to a group of peers in a factor-based analysis. NextEra has an appealing profitability and income profile. Its price momentum looks decent, with a caveat. Its relatively small size (a small mid-cap) coupled with its industry (renewable energy) further weight the odds that this company could be a strong performer in the future. If you want in on renewable energy, we recommend NextEra. The Analysis Overview I created a portfolio of stocks in the alternative energy sector, looking specifically for companies with a market cap over $1B but less than $4B.  This is a sweet spot that offers strong potential for growth but is also substantial enough not to be too speculative. It's my believe that alternative energy is on the ascendance, where as fossil fuels will inevitably decline (NextEra isn't a pure play in this regard however, natural gas assets are part of its portfolio).  If you share this belief and you want exposure to this ma
Post a Comment
Read more

July 11, 2019
I created a portfolio of the top pharmaceutical companies trading in the US and ran a quality of earnings analysis on them.  With the highest possible score being nine, GSK scored the best with seven. Here are the results: Quality of Earnings - Major Pharmaceuticals Here's the balance of the companies in the portfolio.  We can see that AZN was the worst at two. Quality of Earnings - Major Pharmaceuticals 2 Just for laughs, lets see how GSK and AZN have performed from a price perspective. Interestingly, AZN has been outperforming GSK. It'll be interesting to say if this trend will continue or if it will, more correctly I believe, reverse.
Post a Comment
Read more